AMOS delivered to A.D.S. International two large mirrors that will allow the test of the M4 deformable mirror of the largest telescope in the world, the ESO’s Extremely Large Telescope – ELT in short.

The ELT is a giant telescope under construction in Chile, under the responsibility of the European Southern Observatory (ESO). Its dimensions are overwhelming: it will have a primary mirror of 39m in diameter and a height of 60 m. This giant telescope is the largest in the upcoming class of giant telescopes under construction now. It will allow to see the first stars that appeared in the universe, to directly image exoplanets and analyze their atmosphere and many other scientific firsts. Its light collecting area will be more than 10 times more powerful than the existing large telescopes. 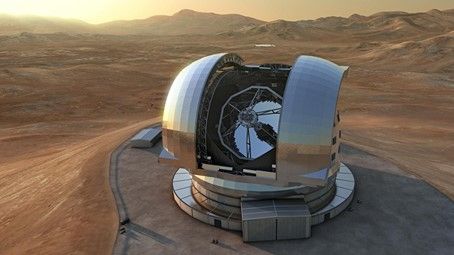 Such a telescope will have a staggering resolution (i.e. ability to see faint details) compared to current telescopes, with an improvement by a factor 4! This resolution will however be only possible if the telescope dynamically compensates for the atmospheric turbulences. This is the role of the M4 system in the ELT: it is a deformable mirror that will correct the light beam distortions caused by the atmosphere. It is a 2.4m mirror supported by more than 5.000 actuators.

ESO contracted the M4 system to AdOptica, a consortium between A.D.S. International and Microgate. A.D.S. International contracted AMOS for two large mirrors to test the M4 system. One mirror is a parabolic mirror of 1.4 m diameter, while the other is a 600 mm flat mirror. Both had to be polished with an extreme precision, as they shall be able to measure the quality of the M4 mirror. The flat mirror was tested vertically, but also suspended upside down, so that its properties are measured with different gravity configurations. 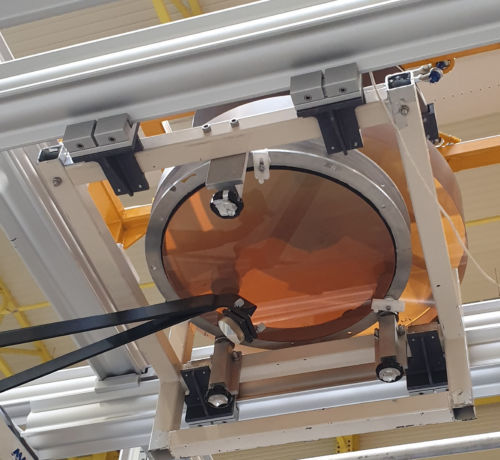 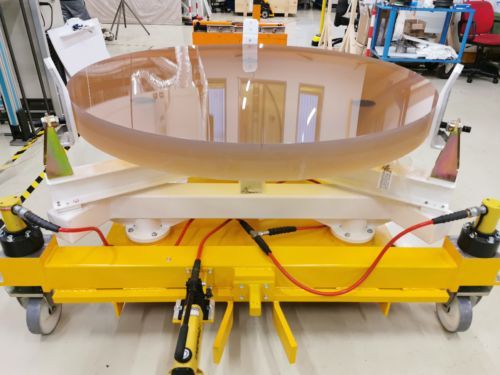 “AMOS was proud to be selected by A.D.S. International for this contract. We appreciated a lot the spirit of collaboration we had with A.D.S. International, their professionalism and the support they provided in this project.” said Xavier Verians, Director Business Development of AMOS. “The fact that those mirrors will be used to test a key element of the largest-to-be telescope in the world is a gratifying feeling for all the collaborators who worked on this project.”

“We are delighted to have received from AMOS these two mirrors that will allow the AdOptica team to qualify the ELT M4 deformable mirror for ESO” said Daniele Gallieni President of A.D.S. International.