AMOS delivered to Mersen Boostec the polished reference body that will carry the 2.4 m adaptive mirror of the largest telescope in the world, the ESO’s Extremely Large Telescope – ELT for short.

The ELT is a giant telescope under construction in Chile, under the responsibility of the European Southern Observatory or ESO. Its dimensions are overwhelming: it will have a primary mirror of 39m in diameter and a height of 60 m. This giant telescope is the largest in the upcoming class of giant telescopes under construction now. It will allow to see the first stars that appeared in the universe, to directly image exoplanets and analyze their atmosphere and many other scientific firsts. Its light collecting area will be over 10 times more powerful than the Keck telescopes.

Such a telescope will have a staggering resolution (i.e. ability to see faint details) compared to current telescopes, with an improvement by a factor 4! This resolution will however be only possible if the telescope dynamically compensates for the errors induced by the atmospheric turbulence. This is the role of the M4 system of the ELT: it is a deformable mirror that will correct the light beam distortions caused by the atmosphere. It is a 2.4m mirror supported by more than 5.000 actuators. Those actuators are embedded in a large plate made of Silicon Carbide that defines the shape of the mirror at rest. This plate acts as an optical reference of the whole ELT.

AMOS was responsible for lapping the 2.7m Silicon Carbide plate into a plane of very high precision. While such lapping operation is a common activity for an optics-polishing company like AMOS, the process was made far more complex due to the presence of the 5000 holes for the actuators. Those holes disturbed the measurement process, affecting the precision of the measurement results in unexpected ways on such large surface. And without clear measurements, it was impossible to know the areas that needed further lapping and polishing to reach the targeted surface.

The measurement issue required a lot of work from AMOS, Mersen Boostec, AdOptica (the M4 builder) and ESO, as well as the involvement of the measurement device manufacturers to try to solve the problem. Together, solutions that implied new measurement approaches, modifications of the tools used, and new algorithms to process the data and convert them into a real map, ultimately delivered accurate measurements, which enabled AMOS to finalize the lapping process.

The combined expertise of ESO, AdOptica, Mersen Boostec and AMOS, as well as Taylor Hobson and Wyler, in a constructive collaboration, helped shape solutions and a way forward that ultimately overcame the identified problem.

The reference body was then shipped to AdOptica so that actuators could be integrated and the whole M4 system be finalized.

“On paper, this project looked easy and a few previous tests on a small prototype did not reveal any difficulties. It was only when starting on the real part that the measurement issue popped up. It is not uncommon for projects flirting with technological firsts to encounter such difficulties. However, these were insidious as they appeared in something that is usually perfectly mastered on an ordinary supporting body. I would like to thank our partners ESO, AdOptica and Mersen Boostec for their constructive and collaborative attitude that was determinant in moving this project forward. I would also like to thank the AMOS team for their hard work and dedication in finding a solution, true to the AMOS policy of never giving up on a job no matter how difficult it seems, so that the customer receives a product that meets his needs.” said Xavier Verians, Director Business Development of AMOS.

Partial view of the front face of the Reference Body. 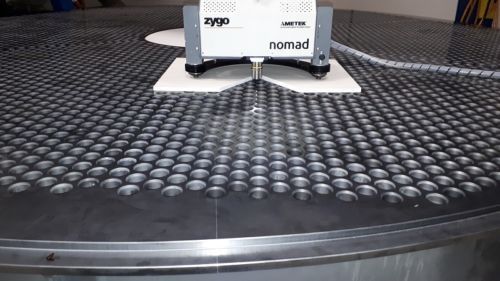 Local measurement of the surface properties. 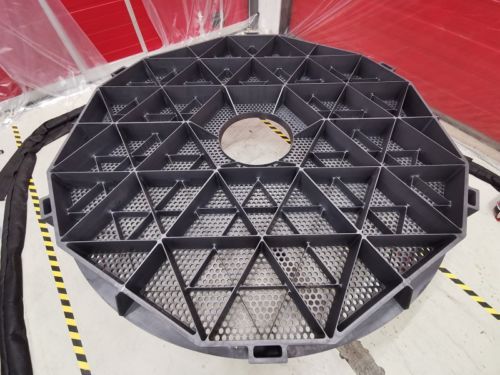 Back side of Reference Body. 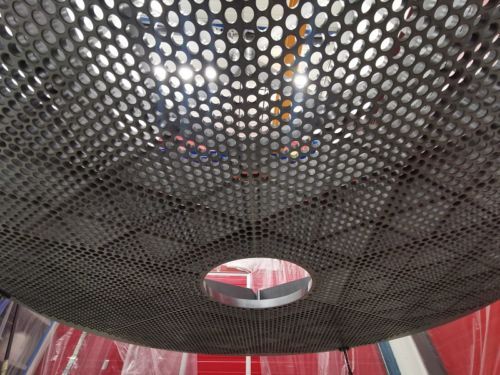