AMOS performed the design, manufacturing and on-site installation of the Cryogenic Test Facility that has been used to test the PLANCK S/C in Centre Spatial de Liège (CSL) premises.
This work has been done in the frame of the ESA Herschel/Planck Project with ALCATEL ALENIA SPACE as prime contractor.
This Cryogenic Facility is composed of a square support whose aim was to maintain the complete S/C with its axis horizontal inside the vacuum vessel.
The square had interfaces with the vessel seismic block in order to get a low level of microvibrations at the interfaces with the S/C to insure its performances.
Dynamic calculation have been done to reach the critical spacified levels.
Around the S/C was placed a thermal tent whose shape was an octagon of 4 200 mm diameter and 4 000 mm length.
It was composed of thermal panels (double skin Nitrogen – Helium).
The inner panels are covered with open Honeycomb and black painted.

In addiction to those equipment, various integration tools have been delivered. 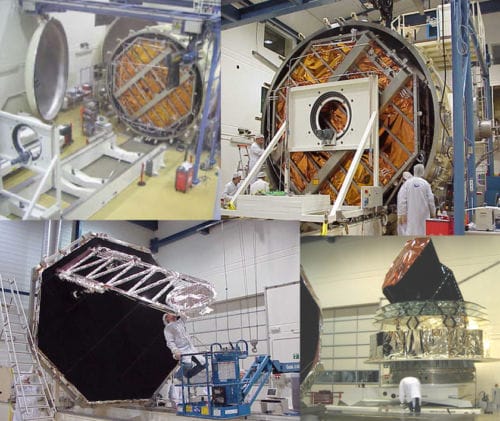