AMOS delivered the collimator for the alignment of the HIPPARCOS (HIgh Precision PARallax COllecting Satellite) payload, being built by MATRA. This collimator is made of a parabolic mirror with a focal length of 2800 mm and a diameter equal to 350 mm.

The body of the collimator is a cylinder made of invar, supported by two XY motorized systems at each extremity.

These XY systems are controlled by micro-processor and allow, by combining their movements, to move the optical axis inside a 2° cone with an accuracy equal to 1 arcsecond. The stability of the structure was a major parameter. The optical axis has a stability with respect to the base structure better than 1 milliarcseconds.

This collimator is certified to work under 10-6 mbar vacuum. 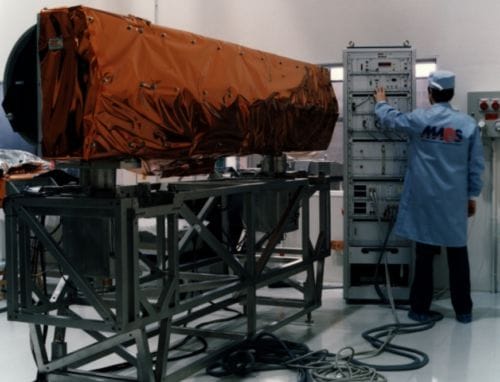 The ISO (Infrared Space Observatory) collimator is based on a Newton system with a parabolic primary mirror of 700 mm diameter and f/4 aperture and a plane secondary which tilts the beam by 90 degrees. The wavefront error at 550 nm is smaller than /25 RMS. The light sources are situated on the side of the tube and positioned by 3 crossed linear translation stages. 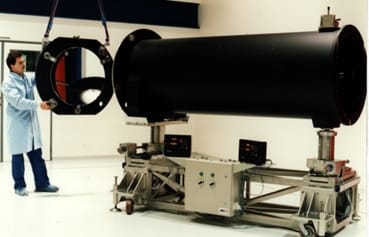 AMOS was responsible for the study and the manufacturing of the SILEX (Semiconductor Intersatellite Link EXperiment) telescope.

The inner wall of the cylinder as well as the mirror supports and baffles are black painted (vacuum compatible) to reduce the surfaces scattering.

This collimator was designed and manufactured following the specifications of SPACEBEL INSTRUMENTATION and MATRA. 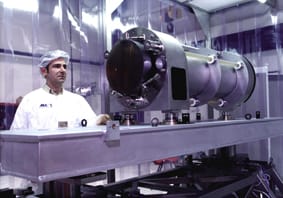 The aim of this OGSE instrument was to send some optical stimuli to SEVIRI (Spinning Enhanced Visible and IR Imager telescope) in order to test its main performances. The instrument is used in vacuum (10-6 mbar) to perform : 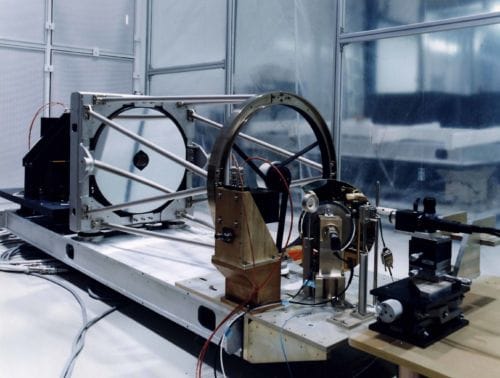 The function of the collimator was to display in front of MERIS (MEdium Resolution Imaging Spectrograph) a polychromatic reference line for the purpose of spectral registration and MTF measurement tests.

The instrument is used under vacuum (10-6 mbar) and it is designed around a Newton on-axis optical configuration with a primary mirror diameter equal to 250 mm. 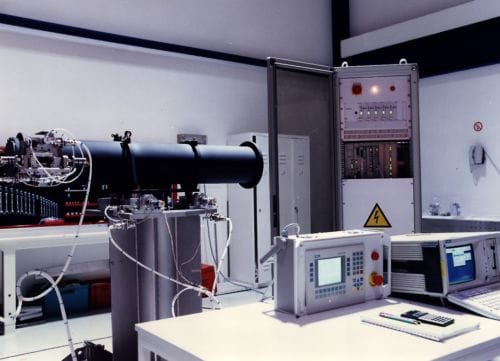